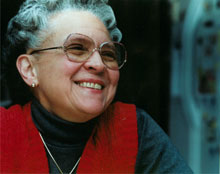 (Photo by Brian Eaton, courtesy of the Daily News, Newburyport)

Rhina P. Espaillat has published ten full-length books and three chapbooks, comprising poetry, essays, and short stories, in both English and her native Spanish, and translations from and into both languages. Her work appears in many journals, anthologies, and websites, and has earned national and international awards, including the T. S. Eliot Prize in Poetry, the Richard Wilbur Award, the Howard Nemerov Prize, the May Sarton Award, the Robert Frost “Tree at My Window” Prize for translation, several honors from the New England Poetry Club, the Poetry Society of America, the Ministry of Culture of the Dominican Republic, and a Lifetime Achievement Award from Salem State College.
Espaillat’s most recent publications are two poetry collection in English titled Playing at Stillness and Her Place in These Designs; a book of Spanish translations titled Oscura fruta/Dark Berries: Forty-Two Poems by Richard Wilbur; and a book of Spanish translations titled Algo hay que no es amigo de los muros/Something There Is That Doesn’t Love a Wall: Forty Poems by Robert Frost.
She is a frequent reader, speaker and workshop leader, and is active with the Powow River Poets, a literary group she cofounded in 1992.